The tireless work of South African non-profit organisation Reach for Recovery (R4R) is funded each year by the Power of Pink campaign, a South African Mushroom Farmers’ Association’s (SAMFA) initiative.

R1 from every pink punnet of fresh mushrooms sold nationally at Pick n Pay stores during October is donated to R4R’s Ditto Project.  The sole objective of this very special project is to provide free silicone prostheses to breast cancer survivors who cannot afford reconstruction after the life altering and heartbreaking reality of a mastectomy.

Launched in 2011, the Power of Pink campaign has resulted in just under 8000 silicone prostheses provided to financially strapped breast cancer survivors at a cost of more than R5,5 million.

“To our astonishment,” exclaims Stephné Jacobs, Reach for Recovery’s National Chairperson, “2020 saw the highest amount raised since the campaign’s inception.  Big hearted South Africans contributed just under R700 000.00 despite their own financial hardships brought on by a year of lockdowns and job cuts. We and the Ditto Project recipients have been truly humbled by this generosity.”

“We couldn’t be prouder of our association with Reach for Recovery’s Ditto Project,” adds SAMFA Chairperson, Ross Richardson. “The dedication of every R4R volunteer – a breast cancer survivor herself – and the immense kindness of all South Africans who support the campaign is such restorative testimony to the goodness that lives in people.”

“Courage is grace under pressure,” said Ernest Hemingway in a 1929 interview with poet Dorothy Parker for The New Yorker magazine. He, of course, was right. Over these difficult Covid-19 years, it’s a mantra that has fuelled and furthered R4R’s most delicate of work, performed out of the public eye.

“Lockdown regulations and the vulnerable health of breast cancer survivors in need brought about new challenges for R4R and our Ditto Project,” explains Stephné. “But being survivors ourselves, we realised very quickly that we could and must continue with our services in other ways! As we have done for 53 years, we continued our work with the assistance of advanced technology. Our organisation’s Peer Support Services passionately offered ongoing much needed support via telephone, WhatsApp, and video conferencing. I am proud to be able to say that we were able to comfort women who not only went through mastectomies but who would also have had to live through the dreadful experience in complete isolation if we were not at the other end for them!”

So, in 2021 let’s once again take courage together, for each of our own health and the restoration of breast cancer survivors. Let’s once again purchase fresh mushrooms in pink punnets at Pick n Pay stores from September 20 this year in an extended Power of Pink campaigns that will run until the end of October.

ALL WOMEN ARE AFFECTED BY BREAST CANCER

Mushrooms in pink punnets support the fight against breast cancer

In South Africa breast cancer is most prevalent amongst white and Asian women but it is also the second most common cancer among black and coloured women: http://bit.ly/1rPJwHh

More than 85 percent of women with breast cancer have no family history of the disease but with all the advances in science, women today have a better chance of surviving breast cancer. The key however, is finding the cancer early.

The increasing numbers of black women being diagnosed with breast cancer is cause for concern. Although there has been an increase in cancer awareness amongst black women many are still presenting themselves at clinics very late, making treatment less successful and their mortality rate much higher. http://bit.ly/TwuASv And the disparity is even more striking in younger black women. Pre-menopausal black women are twice as likely to get basal-like breast tumours – a particularly virulent form of breast cancer – than other women, black or white. http://bit.ly/1jCOQZI

THE POWER OF PINK

One of the key findings to date from the Beckman Institute at the City of Hope Cancer Centre in California and the University of Australia in Sydney in collaboration with Zhejiang University in China is that women who eat an average of 1 mushroom (10gm) per day seem to halve their risk of breast cancer.

MUSHROOMS AND THE LINK TO CANCER

Mushrooms is a source of polysaccaharides, particularly beta-glucans that are reported to stimulate the immune system via its stimulating effect on natural killer (NK) cell activity. NK cells are specialized white blood cells that spontaneously kill pathogen infected and tumor cells making then a key component of the immune system.

Cancer is the uncontrolled growth and spread of cells and can affect almost any part of the body.  Although cancer arises from a single cell, the transformation of a normal cell into a tumour cell is a multistage process which involves the interaction of a person’s genetic factors, social and environmental factors including diet. The role of nutrition in cancer is extensive.

Research suggests a diet high in plant based food stuffs (fruits & veggies) is protective and here we include MUSHROOMS.

Mushrooms  are rich in anti-oxidants; good for immune system; contain selenium  in quantities much higher than any other plant food (selenium is found to have an anti-cancer affect particularly on prostate cancer).  All of these protect the body against cancer by getting rid of free radicals and defending the body against invading organisms.

It is also important to point out that mushrooms are a low energy dense food that can help lower calorie intake to help prevent obesity which is a risk for breast cancer.

But more significantantly, mushrooms contain phytochemicals that are found to specifically supress breast and prostate cancer.

Mushrooms contain a fatty acid, conjugated linoleic acid that has the ability to inhibit two enzymes called Aromatase & 5-Alpha-Reductase, both involved in these cancers.

Many mammary tumors are hormone sensitive. That is why Estrogen is a major factor in the development of Breast Cancer, especially in postmenopausal women where the ovaries stop producing estrogen but other cells (fat & breast cancer cells) unfortunately continue to do so.

The enzyme Aromatase has been linked to breast and also to ovarian, uterine and prostate cancers. It is responsible for the production of estrogen and converts androgen to estrogen, which in turn promotes the development of breast cancer in postmenopausal women.

Tamoxifen is a widely used drug that is prescribed and competes with the estrogen on the same receptor on the tumor cell in interferes with the working of the estrogen. It is effective but has unpleasant side effects and especially in remission it cannot be taken forever. It’s here where mushrooms can act as a natural substitute for controlling the production of estrogen.

It was found that in China the occurrence of breast cancer is 5 times lower than in developed Western Countries and although there could be other factors that contribute to this, we have to bear in mind that China is a world authority when it comes to mushroom consumption. These two facts, the low incidence of breast cancer in China and the huge consumption of mushrooms, sparked the research of the cancer fighting potential of mushrooms.

The two leading groups in the field is the Beckman Institute at the City of Hope Cancer Centre in California under leadership of Prof Chen and a group at the University of Australia in Sydney in collaboration with the medical faculty at the Zhejiang University in China.

This research in particular and the clinical trials are ongoing but one clear fact has emerged to date: It has been proven that women who eat an average of 1 mushroom per day (approx. 10gm) has half the risk of breast cancer.

Dr Martmari van Greuning serves on the council of SAMFA (South African Mushroom Farmers Association) with a specific responsibility to supervise local mushroom research contracted  to the University of Pretoria. Her mushroom expertise is recognised globally and as such she serves on the executive committee of the ISMS (International Society for Mushroom Science).

Martmari is closely involved with the South African mushroom industry and also has strong ties and working relationships with international associations and growers. Her biggest contribution to the local industry lies in visiting farms where she consults and provides technical expertise on all aspects of the mushroom farming process.

Martmari van Greuning is also the General Manager of Sylvan Africa which is part of Sylvan International, the biggest international company producing and supplying mushroom spawn (the equivalent of ‘seed’ or inoculum to grow mushrooms) to the mushroom industry. Her post graduate studies were on various aspects of the commercially grown mushroom and her doctorate on fungal diseases of mushrooms.

Information provided by Reach for Recovery

WHAT IS A BREAST PROSTHESIS?

WHAT IS A BREAST PROSTHESIS MADE OF?

Silicone is a non-toxic, synthetically-made substance that is heat resistant and rubbery. This makes it useful for moulding to the shape of a natural breast and placing next to the skin. If a prosthesis tears or punctures, the silicone can’t be absorbed by the skin

THE ADVANTAGES OF A PROSTHESIS

REPLACING THE WEIGHT OF THE LOST BREAST

When a natural breast is removed, the body is no longer balanced. This can cause a slight curving of the spine and a drop of the shoulder on the affected side. These changes may lead to lower back and neck pain over time. A prosthesis can help to even out the balance. Problems with balance after having a mastectomy can affect women of any breast size.

HOW SOON AFTER SURGERY CAN I START TO WEAR A PROSTHESIS?

HOW DO I PURCHASE A BREAST PROSTHESIS?

WILL PEOPLE BE ABLE TO SEE THAT I AM WEARING A BREAST PROSTHESIS?

If the prosthesis and your bra fit correctly, no-one will be able to see that you are wearing a breast prosthesis.

WHERE CAN I FIND A BREAST CANCER SUPPORT GROUP?

An external breast prosthesis may be the best option a woman has if she cannot afford reconstructive surgery. And the reality is that many breast cancer patients in South Africa cannot even afford a bra, let alone a breast prosthesis

Reach for Recovery is a volunteer driven breast cancer support group where every member is a breast cancer survivor herself. Their Ditto Prosthesis Project is unique in its aim to help underprivileged women recover their self-confidence by providing them with high-quality silicone breast prostheses.

“We believe that women in low-income categories, diagnosed with breast cancer, deserve the same access to support services as anyone else,” explains Reach for Recovery’s Management Board Chairperson, Stephné Jacobs. “No one can understand the self-esteem, financial and family challenges these breast cancer survivors face unless they have walked a mile in their shoes. Our members understand that journey all too well and through the Power of Pink fundraising campaign, they have the capacity to help reshape their lives.”

Reach for Recovery is dedicated to service and ongoing educational and emotional support to breast cancer patients, particularly in state hospitals where the need is enormous. The Ditto Prosthesis Project is an essential part of the healing process for survivors of breast cancer.

We urge all South Africans to support this project by buying mushrooms in pink punnets from Pick n Pay during October. R1 from each 250g punnet of whole or sliced white button mushrooms sold goes to Reach for Recovery’s Ditto Project. 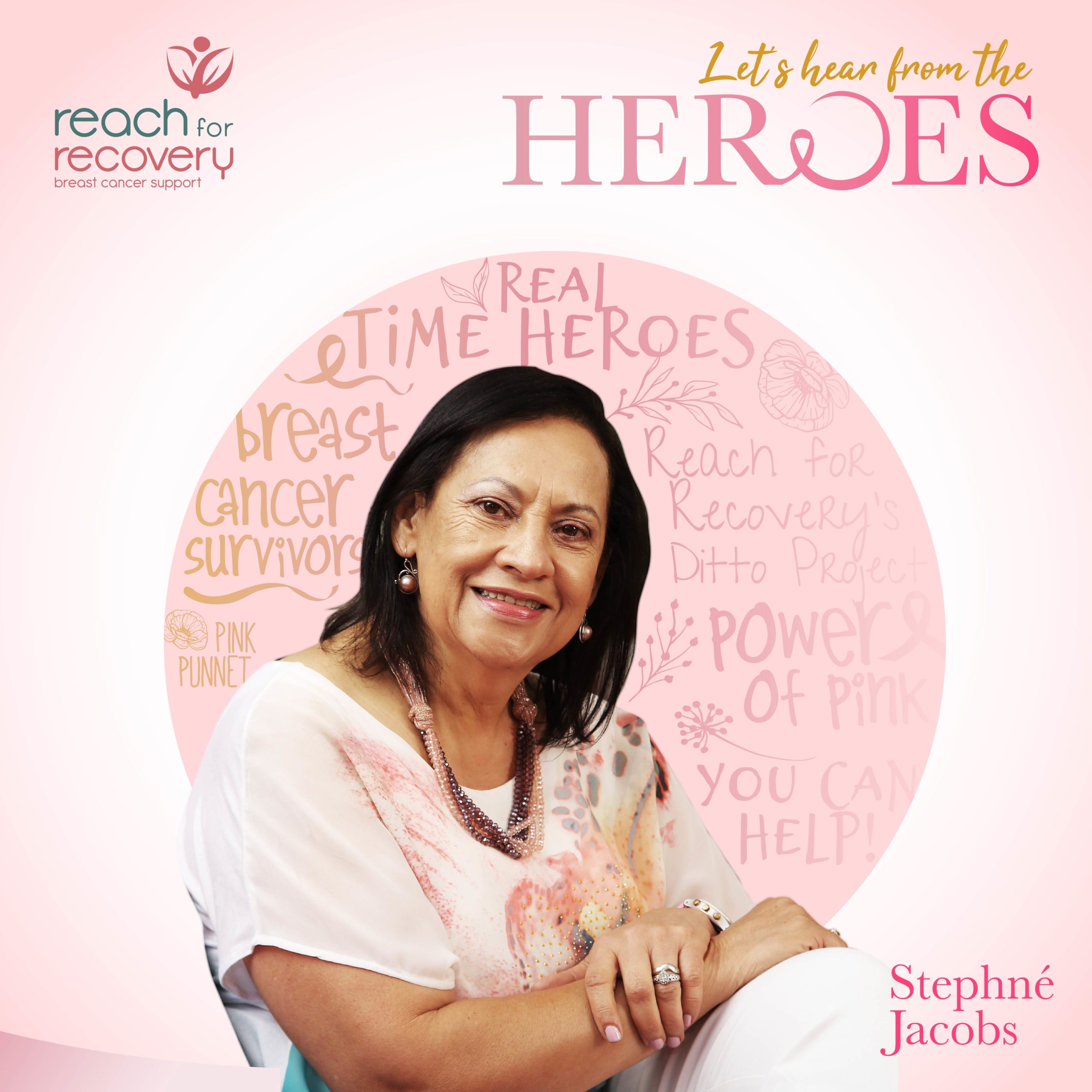